"From London With Love" - interview with Josephine Baan 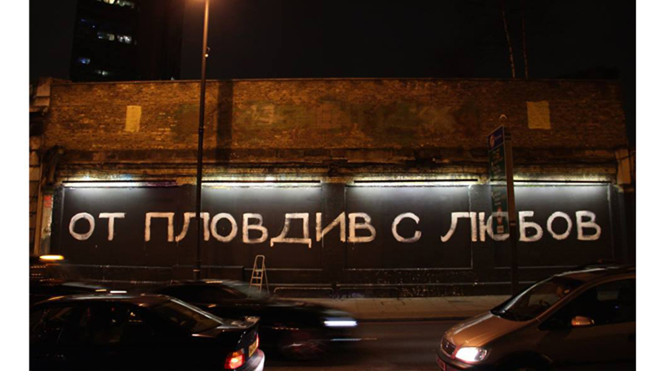 There is a reason for art to go out of galleries. When we start to do shows just to show that we do exhibitions and became so to praise each other, then it comes to degressivity.

Art goes out on the streets because it is part of the cultural climate of any society. It is inspired by people and for people. It doesn't matter how much you try to avoid it, it always wants and have something to show you. Art is not waiting for a response from you, but does not mind the communication between. It does not have exhausted limit, no space limitation. It's like love. Feel it.

Here art happens again. About three months ago on the key intersection in Plovdiv on a billboard a sentence appears "From London with Love", and after three days at London's Shoreditch Street Great Eastern Street 17-19 inscription was found- "От Пловдив с Любов".

This artistic work is made by a young author - Josephine Baan. She was born in the Netherlands, but studies her master's degree in "Fine Arts" at the University of London Goldsmiths University. She lived in Hungary, Uganda and South Africa, and now in the UK. We contacted her with desire to understand more about the idea behind her work, her creative thought and what attracted her to our beautiful city - Plovdiv. 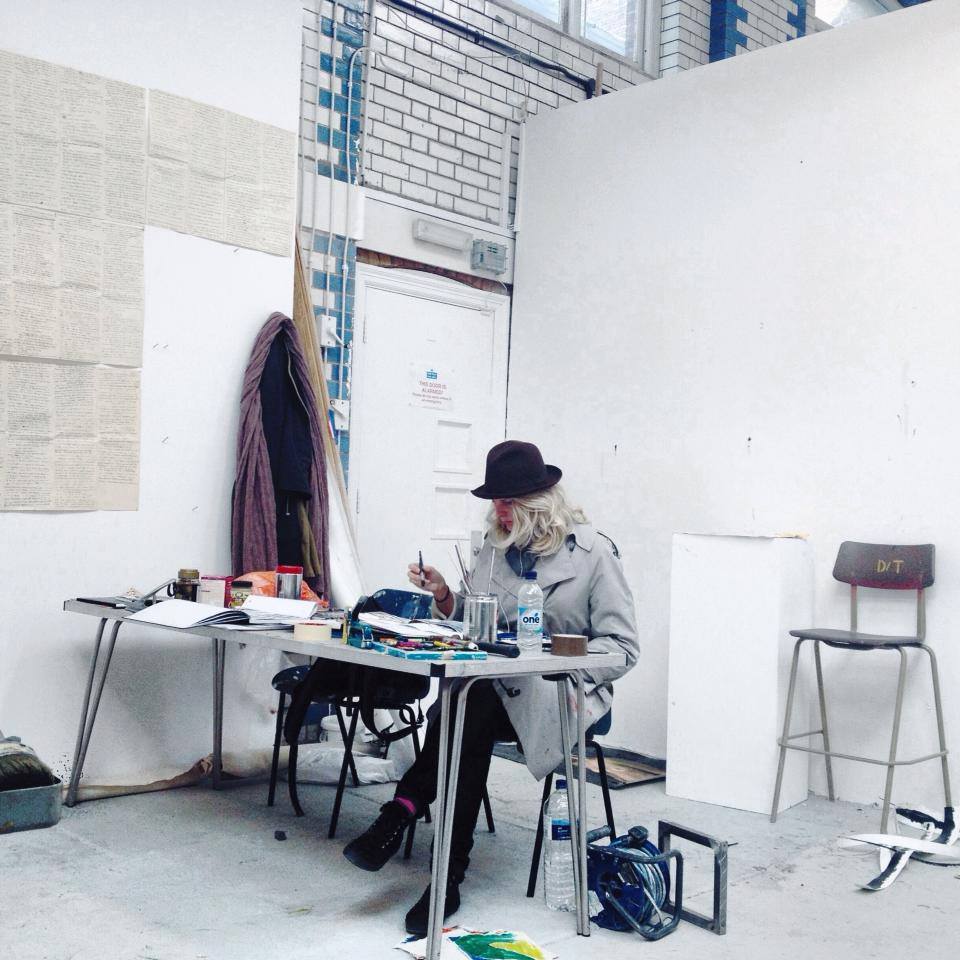 Find out more in the following lines ...

Were do you study, what speciality? (Which are the things that you mainly work on considering the development of your artworks)

I am studying an MFA at Golsmiths University in London. The course is open to all disciplines so we are a large group of people with various practices. When I started at Goldsmiths I was a painter, but now my practice has expanded to many directions, one of which is public art and the use of text. I also like to work together with people.

I have an interest in the power of hierarchical structures and social gestures, as well as dealing with questions of identity and the flow of information in our 24/7 connected world. For me art is a way to explore whether I can pull these power structures into question, or cause a discrepancy in our socially predetermined patterns. I like to provoke.

Which are the strong holds of the street art and why so you prefer this kind of art instead of expositions in galleries?

Living and working in London, it has become even clearer to me how the contemporary art world is exclusive rather than inclusive; galleries, art spaces and museums only serve a relatively small number of people. The white space of a gallery is also a very dominating aspect in the presentation of the work, and predetermines partially how the work is read by its audience. 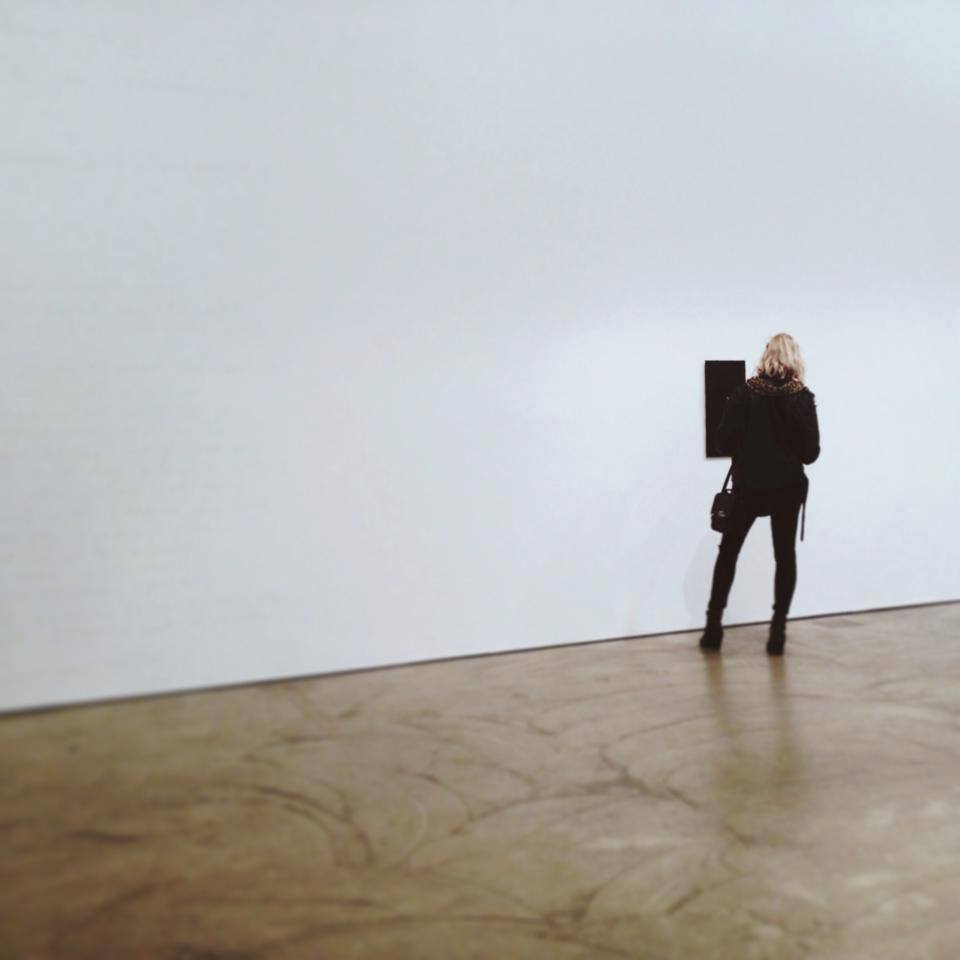 Making work in the public space is an exciting way for me to connect to an audience that is not necessarily an ‘art crowd’ – there might be people who never step into a gallery that see my work on the street. I’m not against art in galleries, but I am for a democratization of art, for finding ways to make art more widely available and not just accessible to a small group of priviledged people.

When where you able to finish your project “From London with Love” And now “От Пловдив с Любов”, which is the main message that you are trying to send thru them?

‘From London with Love’ stood in Plovdiv for 2 weeks in November. When I came back to London, I was lucky enough to work together with the Veda Slovena Bulgarian Choir, who did a performance alongside a film I had made about the billboard in Plovdiv. To make a public sign in London saying “От Пловдив с Любов” was just the next logical step for the project. 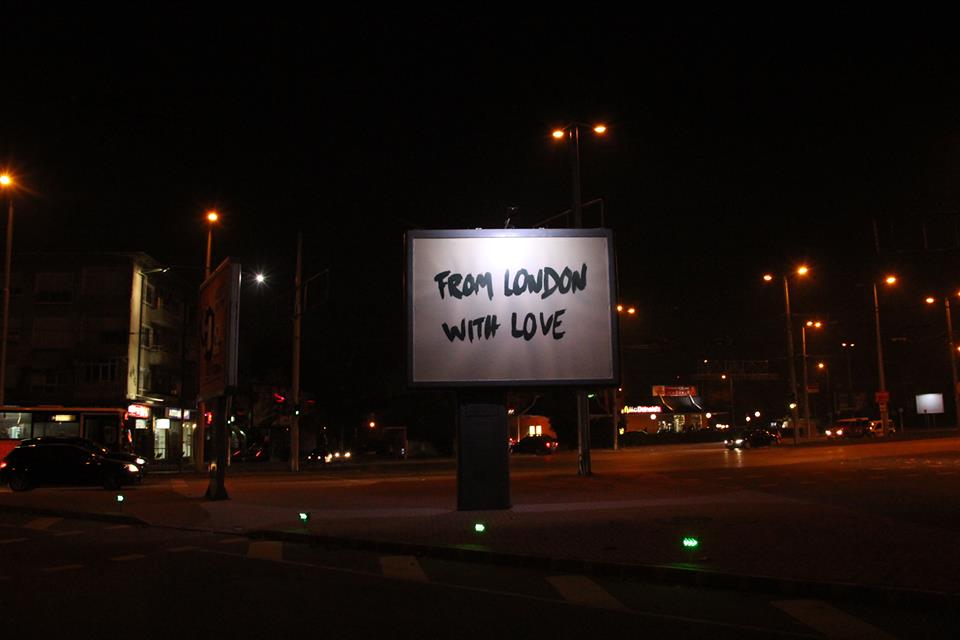 I suppose the main thing I’m trying to do is to address a topic which rests uncomfortably for many people, and remains largely unaddressed. There is a tension and obvious imbalance between Bulgaria and the UK, and for that matter between Eastern and Western Europe. And not only that, we are currently living in a time where many countries in Europe are becoming increasingly defensive and adverse, which I think is a dangerous space to be in.

With this project, I’m drawing attention to these issues and raising questions about them in a subtle manner, to make the viewer think. I always prefer to retain a certain ambivalence in my work, not to be too didactic. The English message in Plovdiv is just as strange as the Cyrillic message in London, and they can both be read in different ways: as a positive message, but also a problematic one, as an ironic statement, or a social comment. Within this, I’m encouraging the viewer to take a position. It’s not so much about providing an answer, but more about asking the right questions.

What inspires you in Plovdiv and why do you prefer it before the other cities?

Plovdiv was the first city I visited in Bulgaria. It is not per se that I prefer it above other cities, but I do really like it there. It’s lively, quite pretty and obviously it has a rich cultural heritage. It’s very exciting that it has been selected as the cultural capital of 2019, and I’m extremely curious to see what will come out of it.

What were the reactions to the accomplishment of your project? Where there any negative

Actually, at the moment I am positively overwhelmed by all the positive reactions I am getting from Bulgarians, both in the UK as well as in Bulgaria. It made me realize that a small gesture like this can mean a lot, that it functions as a powerful acknowledgement. I’m very happy with the result so far.

I haven’t had any negative comments, but I am sure there will be a few coming my way. No matter what your art practice is it is never possible to make something that is free of criticism. 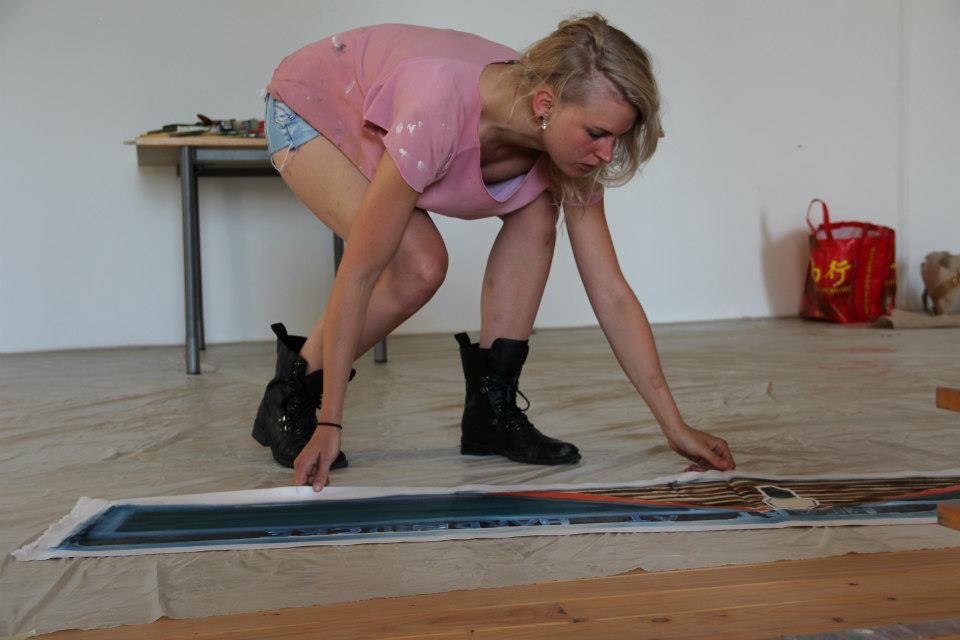 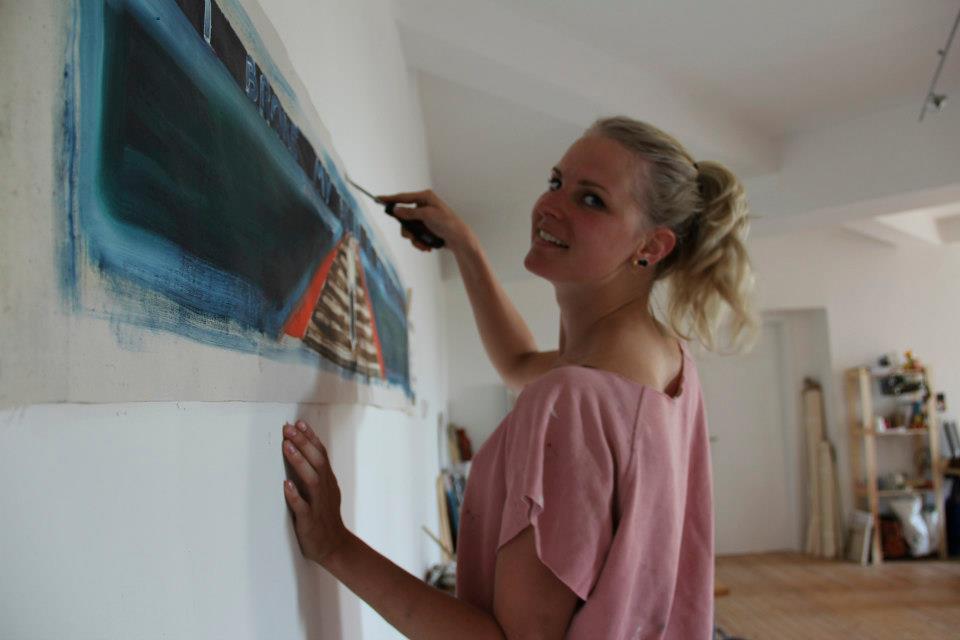 How will you manage to develop your idea "From London with Love" and turn it into your diploma work?

I am not yet certain how, or if, I will use this project for my graduation. I have to see how it develops from here on out, and if there are any further leads which I can work with for the next couple of months. It is constantly subject to change, and I need some time to reflect on it.

Where you able to get to know artworks of the contemporary artists from Bulgaria?

Unfortunately, I haven’t been able to get to know much of Bulgaria’s contemporary artists. When I was in Bulgaria, I had some bad luck with museums being closed, either because of the day of the week, or because they were installing a show, et cetera. I would be interested to learn more though!

In your opinion, what are the similarities and differences between the UK and Bulgaria on creativity and opportunities?

Well, I don’t know much about the creative opportunities in Bulgaria, but I do think it’s a difficult comparison to make. Obviously, London is one of the leading cities when it comes to contemporary art, and there is an abundance of opportunities. There are many MFA studies, galleries, collectors, museums and events – every day there are a lot of things happening. However, because of this very reason, London is also full of artists who are trying to make their way; the competition is very high.

I did a residency for 6 months in Budapest, Hungary. And what I noticed there was that, because there weren’t that many opportunities, local artists would work hard to create opportunities. Setting up temporary gallery spaces or shows, finding different ways to expose their work. People would become very inventive and creative, which made the local art scene quite lively and exciting. This is in a way a much more interesting way to work, because as an artist you wouldn’t necessarily depend on whether you will be ‘discovered’ by a gallery or not. You take matters into your own hands. 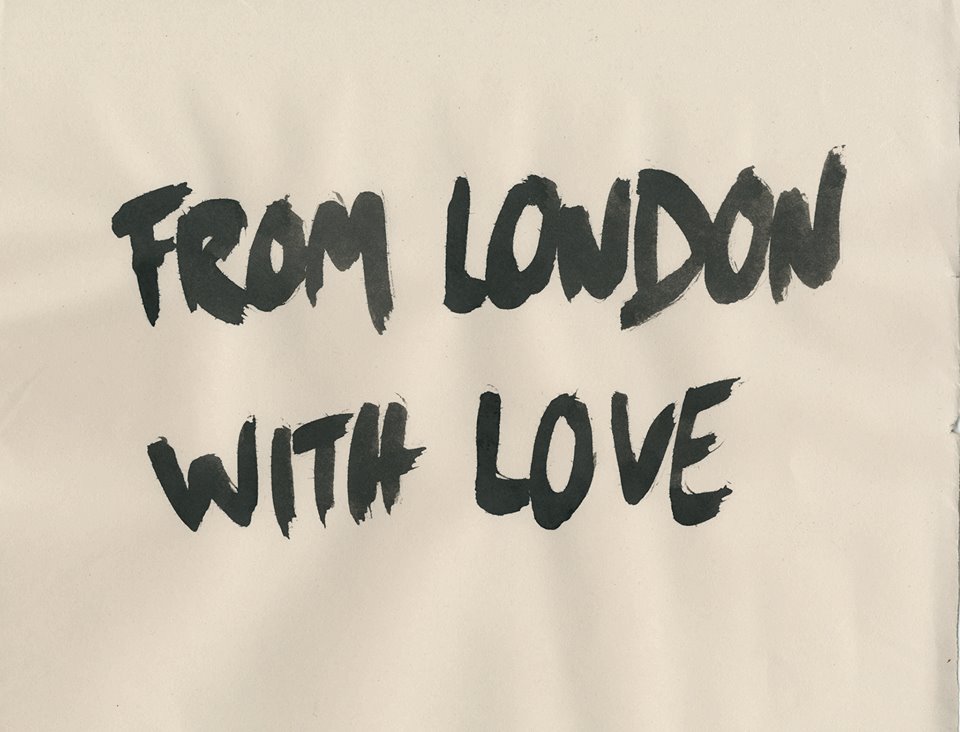 What are the most known things about our country abroad?

To be honest, I didn’t know that much about Bulgaria before I visited it! But I wanted to go there for a long time, and have discovered many wonderful things about it. I think that the Western media tends to portray the negative aspects of Eastern European countries, including Bulgaria, which is a shame. However, I’m getting the impression that an increasing amount of people is starting to explore the Balkans, especially in my generation, and they adore it. You have amazing nature, a rich cultural history, great food and wine and above all I have found Bulgarians (and your neighbouring countries) to be very welcoming and kind. There is a sincerity and a sense of community which is unique. It’s another reason for me to do this project, to address the misconceptions that exist between the East and the West.

Do you have any future projects that you would like to realize in Bulgaria?

At the moment I have nothing planned. I want to see how this project develops and what comes out of it. However I’d be very happy to continue working in Bulgaria, so far it’s been great. 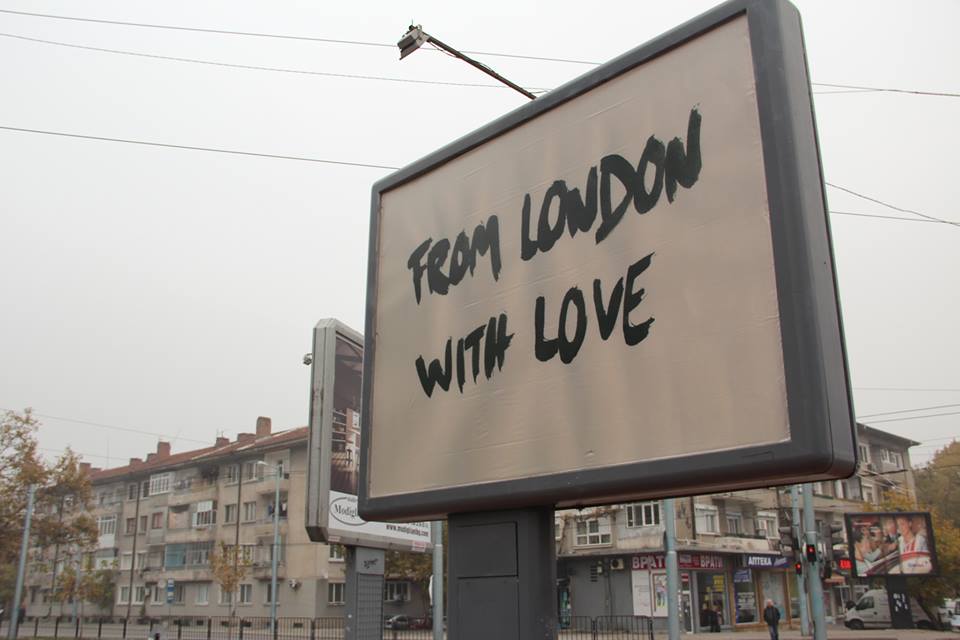